The Loggia dei Lanzi is a beautiful arched gallery that was built in the 14th century at the Piazza della Signoria right in front of the Palazzo Vecchio.

The Loggia: architectural setting and description

This building is formally called the Loggia della Signoria, but is often referred to as the Loggia dei Lanzi due to German mercenary guards (in Italian: Lanzichenecchi, corrupted to Lanzi) who were stationed there on their way to Rome in the sixteenth century (1527).
It was built in the fourteenth century by Simone di Francesco Talenti, Lorenzo di Filippo, and Benci di Cione.
Construction occurred between 1376 and 1382. The beautifully proportioned open gallery was designed in a late Gothic style, a clear precursor to the soon to be popular Renaissance style. Michelangelo, one of the most prominent Renaissance artists, even proposed to extend the gallery along all sides of the Piazza della Signoria, but Cosimo I de’ Medici, Duke of Florence, eventually decided it would be too expensive.

The loggia originally served to house the assemblies of the people, and hold public ceremonies and the official ceremonies of the Florentine Republic.
The Lodge symbolized the Republic.

On the façade, placed in correspondence of the columns of the arches, are four trefoils with allegorical figures of the four cardinal virtues (Fortitude, Temperance, Justice and Prudence) by Agnolo Gaddi (1383-1386). Their blue enamelled background is the work of Leonardo, a monk, while the golden stars were painted by Lorenzo de’ Bicci.
The vault, composed of semicircles, was done by the Florentine Antonio de’ Pucci.

Starting from the 1500’s, for wanting of the de’ Medici family, and with the birth of the Grand Duchy of Tuscany, the Loggia was destined to receive some masterpieces of the sculpture, becoming one of the first open-air sculpture gallery spaces in the world.

Two marble sculptures of lions, the Marzoccos, heraldic symbols of Florence, guard this precious house of art.
The one on the right dates from Roman times, the one on the left was sculpted by Flaminio Vacca in 1598 and was originally placed in the Villa Medici in Rome and in the Loggia in 1789.

The tradition of setting up statues in the loggia started in 1494 when the Florentines expelled the Medici, who had ruled over the city for more than 150 years.

To celebrate the revolt against their former rulers, Florentine citizens transported Donatello’s statue of Judith and Holofernes from the palace of the Medici to the piazza in front of the Palazzo Vecchio. The choice of the statue was no coincidence: it depicts a woman decapitating a tyrant and symbolized the end of the reign of the Medici.

The house of Medici soon regained its power in Florence, and duke Cosimo I commissioned Benvenuto Cellini to create a sculpture depicting the mythical hero Perseus after he beheaded Medusa. (Perseus Holding the Severed Head of Medusa) . 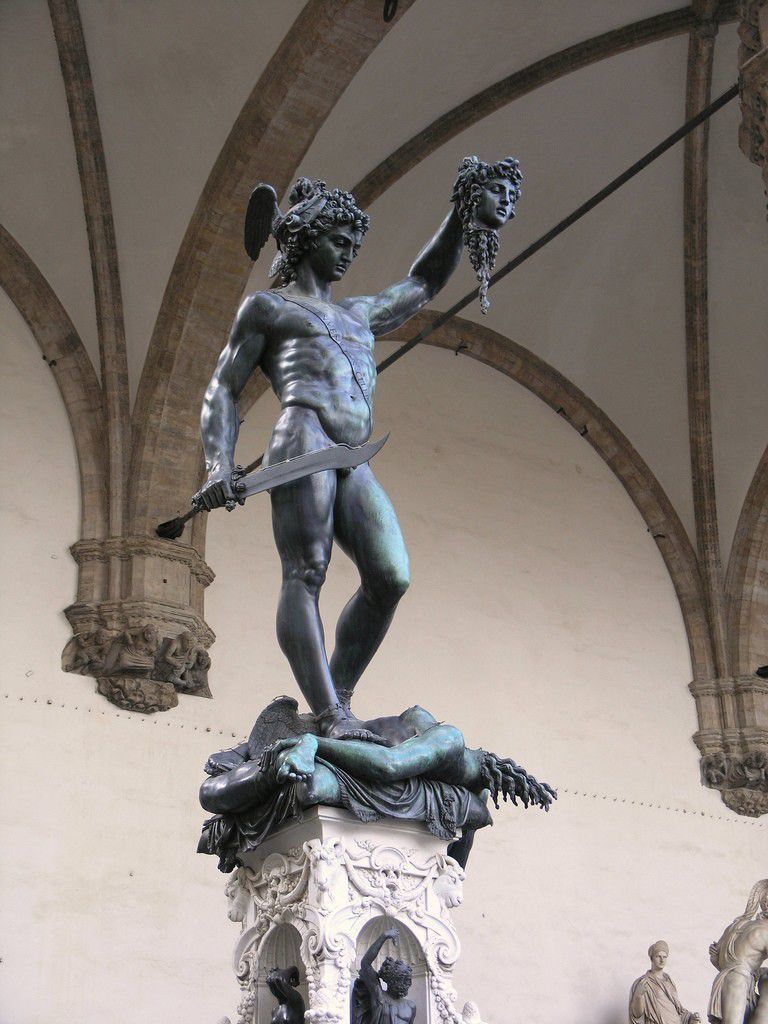 It took nine years to be cast, and it shows the mythical Greek hero brandishing his sword with his right hand and holding up the Medusa’s decapitated head with his left hand, with blood gushing from the head and the neck.
This bronze statue was supposed to represent the death of the republican institutions, through the swift cutting off of Medusa’s head, and the end of civil strife, as symbolized by the snakes.
After its completion in 1554, Cellini positioned this wonderful statue so as to look down upon the audience, as if to capture its attention.
Its marble pedestal is a masterpiece in itself, largely due to the fine workmanship of the small bronze figures representing the myth of Perseus.
On account of his accuracy and detail-mindedness, Cellini was considered the most skilled Florentine goldsmith, and there is even a bust of him on the Ponte Vecchio.
One noteworthy mystery: there appears to be a human face on the back of Perseus’s head. This is thought to be Cellini’s self-portrait.

In 1583, once construction of the Uffizi palace was finished, Bernardo Buontalenti built a terrace on top of the Loggia, from which the Medici princes could watch ceremonies in the square terrace, which today belongs to the bar of the Uffizi museum.

Other masterpieces present in the Loggia dei Lanzi include:

Giambologna’s Rape of the Sabines (1579-1583). This impressive marble group was installed here in 1583 at the behest of the son of Cosimo I, Francesco I.
The statue is over 4 metres high and is the first group representing more than a single figure in European sculptural history to be conceived without a dominant viewpoint. It can be equally admired from all sides, and it was made from one imperfect block of white marble, the largest block ever transported to Florence.

Hercules fighting the centaur Nessus (1595-1600). A lesser-known sculpture of Giambologna, made in 1599 but placed here only in the nineteenth century

Rape of Polyxena by the italian Pio Fedi dates to 1800

The group Menelaus supporting the body of Patroclus, discovered in Rome stood originally at the southern end of the Ponte Vecchio. There is another version of this much-restored Roman marble in the Palazzo Pitti.
It is an ancient Roman sculpture from the Flavian era, copied from a Hellenistic Pergamene original of the mid third century BC. This marble group was discovered in Rome. It has undergone restorations by Ludovico Salvetti, to a model by Pietro Tacca (1640) and by Stefano Ricci (about 1830).

On the back of the Loggia there are five marble female statues (three are identified as Matidia, Marciana and Agrippina Minor), Sabines and a statue of a barbarian prisoner Thusnelda from Roman times from the era of Trajan to Hadrian. They were discovered in Rome in 1541. The statues had been in the Medici villa at Rome since 1584 and were brought here by Pietro Leopoldo in 1789. They all have significant, modern restorations.

On the right wall there is an inscription in Latin that recalls the adoption of the common calendar in Florence in 1750 (which begins on January 1). Before that time, the new year was celebrated on March 25.
Another inscription of 1863 recalls the stages of Italian unification.

Today, the Loggia della Signoria holds invaluable sculptural masterpieces, all original, and to be enjoyed freely day and night.

This post was originally published in September 28, 2013 and has been updated and enriched on August 7, 2017.