Its construction began in the thirteenth century, led by architect Arnolfo di Cambio. Originally the palace was the seat of the judiciary and was called Palazzo dei Priori. It was built on the ruins of earlier buildings. The ancient tower of The Vacca was incorporated with the palace, which is why the tower is not symmetrical to the building. 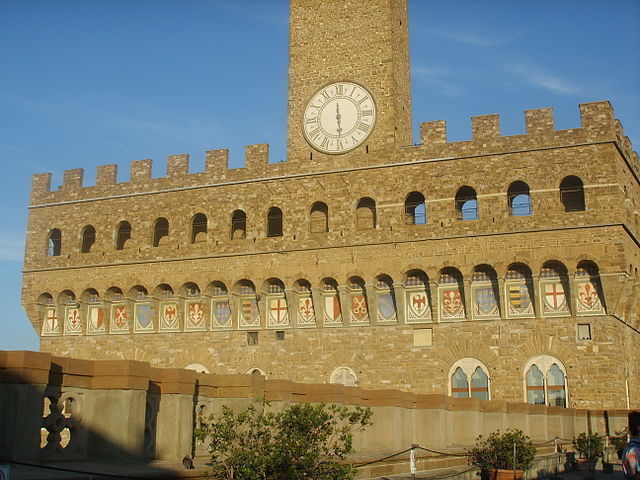 The current building is the result of further changes that occurred in 1500 when it became the residence of the Grand Duke Cosimo I de’ Medici. Giorgio Vasari was commissioned to expand and renovate the entire building. When Cosimo moved to the Pitti Palace in 1565, the building became known as Palazzo Vecchio.

Vasari built a passage, the famous Vasari Corridor, that connects Palazzo Vecchio with the Pitti Palace by crossing the Arno on top of the Ponte Vecchio. Palazzo Vecchio was also home to the Italian Parliament at the time when Florence was capital of Italy, namely, between 1865 and 1871. The building has two types of crenelations: that squared on the balcony is the Guelph type, and the dovetail decorating the tower is the ghibellino type.

At about 94 meters high, the tower is not centered on the front but is shifted to the right. The reason for this unusual asymmetrical positioning is based on the fact that the tower previously belonged to the ancient palace of the Foraboschi. 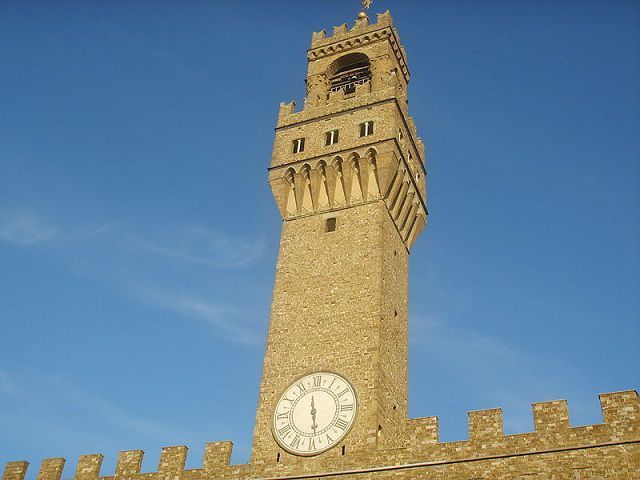 It was nicknamed by the Florentines as Torre della Vacca (the cow tower) due to the large, surmounted bell. The tower was reopened in June of 2012 and is among the most visited monuments; from its top you can see all of Florence.

The clock on the tower’s facade was Florence’s first public clock. It was installed on March 25, 1353, by Niccolò di Bernardo, a Florentine watchmaker. He had designed the clock in his shop located on the street side of the building, Via Albertinelli, which has since been renamed Oriuolo Street. Oriuolo is a word from the ancient Florentine dialect meaning watch.

This was also the first public clock manufactured in Florence as well as the first mechanical watch . From there, a century later, his grandson Angelo Niccolai degli Orologi built the mechanical watch of Santa Maria del Fiore Church, with the dial being painted by Paolo Uccello, a single-handed dial simulating the movement of the sundial’s shadow. The clock in Arnolfo Tower was replaced in 1667 by a clock built by George Lederle di Augusta and modified by Vincenzo Viviani. It still works and has as its main feature a single hand with counterweight.

How to read the time

The special feature of the clock in Arnolfo Tower is its single hand, which was typical of the first clocks built in the Middle Ages.

For those of us today accustomed to clocks with two hands or digital watches, when walking in Piazza della Signoria and looking up at the tower, we might get the impression that the clock is broken, when in reality, it functions perfectly. You have to look at the longer end of the needle; the shorter part is a simple counterweight.

The hours are marked with Roman numerals. To calculate the minutes you need to check the movement of the needle in the range intermediately between a numeral and the other end of the dial.

Journalist and blogger convinced that many of the answers to current events are found in the past. She has studied in Latin and Greek and is passionate about archaeology and classical mythology. Although she enjoys gazing into the past, she embraces technological innovation and seizes all its possibilities. The ability to combine what we are with what we were is her idea of wisdom! She wrote a series of articles for Florence Inferno, our blog about the Florentine mysteries, symbols, and places that are mentioned in Dan Brown’s latest novel Inferno, and much more about the city. We also offer a guided Inferno walking tour, which follows the footsteps of Robert and Sienna, as well as an an eBook with an audio version.

Live webinar to learn about the art, history and architecture of Florence.

» Discover more interactive virtual tours, webinars, and activities all around the world
Search